Love Thy Neighbor: A Story of War 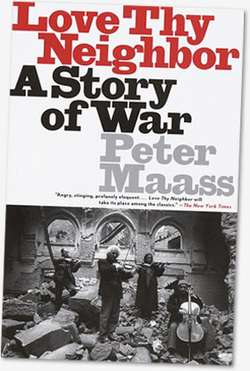 Love Thy Neighbor: A Story of War by Peter Maas is a worthy portrayal of the genocide in Bosnia. It deals with the subject from a very personal perspective, as he is a journalist who spent time in Bosnia during the war. I gave this book a four out of five stars because I was very captivated while reading it, and definitely feel as though I learned much about the Bosnian genocide.

As for teachability, I think I would incorporate this book into my lesson plans, but not in its entirety. The reason is that a lot of the material is rather vulgar and deals with mature topics, such as rape, castration, and other wartime atrocities. However, depending on the grade-level this book could be a very good resource. For older students, like mature juniors and seniors in high school, I could use parts of this book when talking about topics of genocide, especially his perception of victims and experiences. Even for freshman and sophomores, certain parts could be censored so that students could gain an understanding without reading beyond their maturity level. I do not think I would assign the entire book because it would be much too hard to censor, and some material goes beyond the scope of high school range. However, so much of the material is valuable and should have a chance to be explored by students.

In general, I really liked this book. I like the direct manner of Maass’ writing, and as he is a journalist, his writing went beyond the historical situation, and went deep into the personal stories of victims and perpetrators. The book was easy to read, and definitely felt like a page turner, but the material was definitely hard to digest. However, I think I gained a vast experience of the Bosnian genocide through this book and highly recommend it.

I thought Peter Maass’ novel Love Thy Neighbor: A Story of War  is a well-written, approachable novel about a topic that is very hard to discuss.  I also think he did a great job of adding in historically significant aspects of the genocide along with his personal anecdotes.  By creating that balance between personal facts and personal anecdotes, the novel becomes something that is approachable to students, but also useful for them to understand the history of the conflict.  While I enjoyed the novel, and I know most of my peers would enjoy it as well, I think the language and descriptions may be a bit too mature for younger audiences.  If I was to teach it in high school, it would have to be for seniors.  He approaches topics without censoring his opinions or descriptions.  I believe this is the most beneficial way to approach talking about genocide, because it feels genuine.  I appreciated Maass’ honesty in his writing and I felt as though he did not have any underlying agenda.  In a war that was filled with propaganda and differing stories and outcomes of the same events, I appreciated Maass’ attempts at staying neutral in his writing and clearly relaying his own opinion, and not trying to confirm a specific narrative.  That is not to say that Maass was not biased, but it was clear that his writing was relaying a personal experience.

Overall, I do not think that this novel is teachable for the mere reason that a lot of Maass descriptions are too graphic and disturbing for the classroom.  Like I said before, if it could be taught, it would have to be for seniors in high school.  There are descriptions of rape, castration, and murder.  These descriptions are very graphic and they appear every 50 pages throughout the book.  If I was to teach the novel, I would probably isolate certain chapters to read and study them individually rather than the book as a whole.  Maass attempts to work out how such an atrocity can occur in the 20th century and he works to humanize the main players of the story, both the victims and the war criminals.  It is so easy to remove any human connection from the teaching of genocide because, frankly, it makes the learning process but more bearable.  But Maass finds a way to humanize the victims which is disturbing, but serves a purpose.  At the same time, by humanizing the perpetrators, it makes their actions seem that much more grotesque and this also serves to demonize them even further in that process.

If I had to rate this novel, I would give it four out of five stars.  It was well-written and easy to read.  The language was not difficult, but the content was understandably hard to take in.  It takes a very mature audience to be able to handle some of the descriptions that Maass uses.  I would definitely consider using specific anecdotes and teaching isolated chapters of the novel in the classroom.

Not My Turn to Die: Memoirs of a Broken Childhood in Bosnia 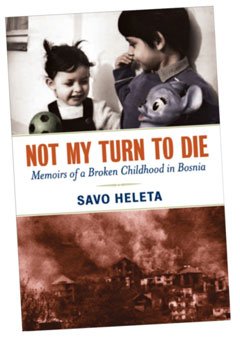 Summary:
In his autobiographical tale, Not My Turn to Die, Savo Heleta retells his childhood as a Serb living in a Muslim-controlled city amid the horrors of the Bosnian genocide. Heleta's account is an example of the often forgotten side of the Bosnian genocide: the backlash or revenge by Muslims on Serbs. The story chronicles the Heleta's experience as victims of discrimination, prejudice, and physical violence. The reader learns the power propaganda, war, and fear have in shaping a community. Perhaps the most important lesson learned was no individual who has survived such horrific actions could do so without the help of another person.

--"Now I see that in a war, you don't have to be guilty in order to be terrorized and killed" (70).
--"Innocent people were paying the price. Not one side in the war ever cared about the civilian victims. Sometimes, civilians were called collateral damage, and in other instances they were victims of revenge...Bosnia was a circle of death and terror. Not one side was strong enough to win the war, and no one was ready to surrender" (97).
--"Their generosity kept a spark alive in the darkest moments when we had nothing and there was no hope on the horizon that we would find any food soon" (109).
--"People don't have to be killed or physically tortured in order to suffer greatly and be humiliated. Verbal assaults, psychological pressures, stripping people of their human rights, and public dishonoring can sometimes be even more painful than actual torment or death" (127).
--"Don't lose your own humanity by taking anyone's life" (203).
--"It came through the individuals who were there for us when we needed help the most. Yet I never understood why I was saved when many others weren't. Perhaps, it simply was not my turn to die" (227).

Erin's:
Erin's rating: ***--
Not My Turn to Die was an easy read and would be appropriate for students grades 7-12. Even students with reading comprehension difficulties would be able to read this text. I was scared that this text, because of the context, would be graphic or to disturbing to get through. I was pleasantly (loosely defined) surprised at how easily I was able to understand the events. While most literature on the Bosnian genocide depicts the violence against Muslims by Serbs, Heleta's tale gives the flipside of the coin. I would not teach this text by itself. Like any genocide, it is important to put it in context. We, as teachers, need to show our students the importance of perception, point of view, and voice. By teaching Heleta's story in conjunction with Haass' Love Thy Neighbor, students would be able to form a more holistic understanding of this atrocity.

I think that because Heleta is recounting details of his childhood, his description of events are more simplistic than other memoirs. While I value his testimony, I wish there was more to the story. Without knowing the context, the geography, or the ethnographic history, the reader is lost and the complete impact of Heleta's story is lost. Heleta includes as many historical events that he can. However, there is no analysis of their importance or greater impact, or even complete details of events. To truly understand, a reader would have to use some outside source for complete details and have a better understanding.