Events Before the Genocide 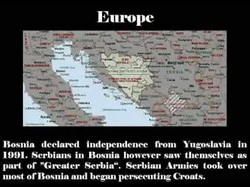 Decades before the genocide, tensions existed between the different ethnic groups that made up Yugoslavia.  Once Yugoslavia's communist government began falling in the late 1980s and early 1990s after the communist president, Tito, died in 1980, separate provinces seized the opportunity  to declare their independence.  Slobodan Miloševic  who took power in Serbia in 1987--and therefore, Yugoslavia as a whole, as well--pushed nationalism among Serbs all across Yugoslavia, enflaming tensions and furthering the desire for Croats, Bosniaks (Muslim Serbs), and other regions and ethnicities to separate.  Once Croatia and Slovenia each declared their independence in 1991, war was declared between Serbia and the two regions individually (serving as two of the three wars that occurred in Yugoslavia during this decade).

Multi-ethinic Bosnia quickly followed suit in declaring its own independence, and by 1992 was considered independent by the US and EU.  Serbs in Bosnia, as well as Miloševic, all still strongly nationalist, responded by invading Bosnia under the pretense to "free" Serbs in Bosnian regions.  By April of 1992, Serbia began its "ethnic cleansing" of Bosniaks (Muslim Serbs) in Bosnia, and had declared war, to try to gain control again over the region.  This war is the same war taking place in Savo Heleta's Not My Turn To Die.
(Sources: Holocaust Museum Houston and Peace Pledge Union Information)
"In Bosnia-home to a mix of three different ethnic groups-Muslim nationalists wanted independence from Yugoslavia, Croats wanted the territory populated with a Croatian majority to be incorporated into Croatia, and Serbs wanted to incorporate the territory with a Serbian majority into Serbia. The problem in Bosnia was that there were no clear-cut boundaries-there weren't three different regions, one for each ethnic group. People lived in ethnically mixed cities, villages, neighborhoods, and apartment buildings."
~Savo Heleta: Not My Turn to Die (p. 12)

Events During the Genocide 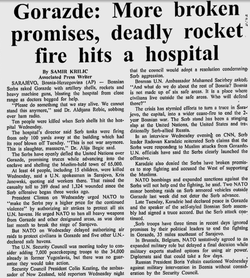 In July 1995, Serbs committed the largest massacre since the Holocaust in Srebrenica (a "safe area") in which an estimated 23,000 women and children were put on buses and relocated out of the city, and approximately 8,000 "military age" men were murdered (Holocaust Museum Houston).

The featured picture above is a snapshot of an article about attacks that occurred in the same hospital that Heleta talks about in Not My Turn To Die.

"The country was officially divided into two, and unofficially into three, homogeneous ethnic parts. Serbs retained their own entity. Croats and Muslims share another entity only on paper, since in reality, they are segregated along ethnic lines. The nationalists who had triggered the bloodshed, backed by the Western world, remained in power long after the war had formally ended." (Heleta, 200).

"Many individuals were indicted for genocide following the war, but only one has actually been convicted by the International Criminal Tribunal for the Former Yugoslavia, a court set up to prosecute those who committed genocide. In 2001, Radislav Krstic, the general of the Bosnian Serb army was convicted of genocide and sentenced to 46 years in prison. Slobodan Milosevic was also indicted, but he died before his case could come to trial.

Aside from the establishment of the International Criminal Tribunal, there have been several other consequences of the Bosnian Genocide. NATO’s use of military power was its first use of military force in its history. A United Nations’ peacekeeping force remains in Kosovo, a former part of Yugoslavia adjacent to Bosnia and Serbia, to police the country and prevent future wars and horrors [...]

This is just a simple overview of the Bosnian genocide, but from it one can learn many lessons about how to prevent such horrors in the future. First, the United Nations and foreign diplomats must take ethnic and religious ties between peoples in newly independent states more seriously in the future with an eye to recognizing possible ethnic problems before they begin. Second, the lessons of the past must continue to be told so as to never forget humanity’s capacity for great evil. The second mankind thinks it is not capable of such horrors again is the second that they are repeated. Finally, because NATO bombings contributed to the enactment of genocide, nations of the world must take greater care before using force lest their intervention make matters worse."

What Have We Learned from the Bosnian Genocide?

From the book Teaching About Genocide:Issues, Approaches, and Resources edited by Samuel Totten, "the tragedy of war and genocide in Bosnia suggests a number of lessons. First, hateful propoganda, atrocities in war, and ethnic cleansing are often early warning signs of potential genocide. Second, mass media, particularly television, can be powerful means of creating hatred and fears that can lead to a genocidal mentality, that is, the willingness to consider the destruction of a group as a means of solving one's own group's problems. Third, once a regime has decided to engage in genocide's as a social policy, only intervention from the outside world is likely to stop it" (Totten 200).
Powered by