Sarajevo: The capital city of Bosnia.


During the war, the city was seized by Serb forces from April 5, 1992 through February 29th 1996. It is the longest siege of a capital city in the history of modern warfare.  Following Bosnia and Herzegovina's declaration of independence from Yugoslavia, Serbian leaders declared a Serbian state which was carved from the territory of Bosnia and Herzegovina. These Serbian forces encircled Sarajevo with 18,000 troops stationed around the city.  They were equip with artillery, mortars, tanks, anti-aircraft guns, heavy machine-guns, rocket launchers, and sniper rifles.  They blockaded the city and the Bosnian governments inside the city were not well prepared and cold not break the siege.  During the siege, 11,541 people lost their lives. 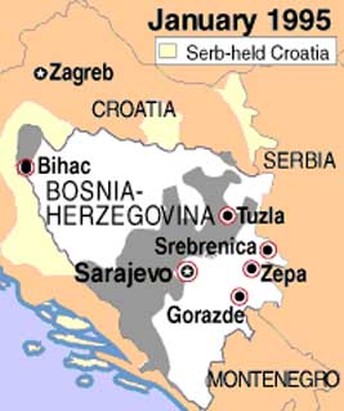 
These three cities were considered safe areas by the United Nations Security Council.  All cities were areas which had a majority of Muslims living there before and during the war.  UN peacekeepers protected these areas, but they were still very dangerous to live in.  In 1995, Serbs committed a major massacre against the city of Srebrenica.  Twenty-three thousand women, children, and elderly people were put on buses and driven out of the city while 8,000 men who were of "battle-age" were detained and killed.  Following this massacre, the international community finally woke up to the atrocities of the event and the United States began to commit air-strikes against Serb forces.
Powered by