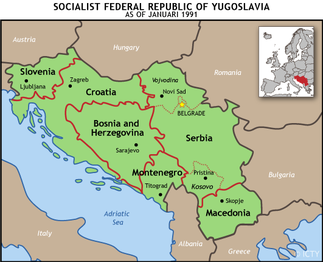 This is a map of Yugoslavia in 1991.  It was divided into five semi-autonomous republics before three wars broke out during this time period (in the 90’s).  In 1991, Slovenia and Croatia declared independence while Bosnia and Herzegovina did the same in 1992.  Yugoslavia is one of the most ethnically diverse nations in Europe, partially due to the Ottoman conquest of the country from the 15th-19th century which led to an influx of Muslim populations.  It then fell under Austro-Hungarian rule in the 19th century.  In 1918, Yugoslavia became its own independent state, leaving a legacy of ethnic and cultural influences remaining in its provinces.